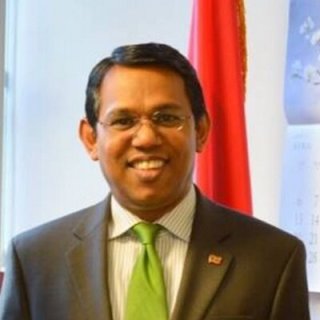 The first session of climate talks for the year wraps up with structure and form of the new climate agreement left to be decided. The Chair of the Alliance of Small Island States (AOSIS) Ambassador Ahmed Sareer, the Maldives’ Permanent Representative to the U.N. spoke on  his expectations for the year ahead, and his thoughts on the Geneva climate talks.

Addressing the Needs of the Most Vulnerable

AOSIS is among the most vulnerable states to impacts of climate change, with the increase of global temperature resulting in sea level rise which leads to many issues to communities living in small islands among which loss of homes, livelihoods as well as lack of drinking water. Ambassador Sareer highlighted the importance of addressing climate change as an immediate issue, which threatens the life of vulnerable communities across the world.

“As representatives of some of the countries most vulnerable to climate change, including total inundation from sea level rise, our primary motivation is to make sure the global community moves as quickly as possible to cut the emissions responsible for climate change, and provides the support necessary to help vulnerable communities build sustainable futures and adapt to climate impacts that can no longer be avoided,” he said.

One of the key issues that surrounded the Geneva talks as well as the rest of the sessions leading up to Paris is the legal nature of the Agreement. Explaining AOSIS position in this regard, Ambassador Sareer added, “Our view is that a legally binding protocol under the convention that is applicable to all Parties, and in line with keeping global temperature increase to below 1.5 degrees Celsius, is the best way to achieve that objective. Additionally, it will need to give balanced treatment to key areas, including mitigation, finance, capacity building, technology, adaptation, and loss and damage to manage impacts that can no longer be adapted to. Loss and damage is qualitatively different than adaptation and should be treated separately under the agreement.”

For an Agreement in Paris

Ambassador Sareer  expressing his opinion on the outcome of the Geneva session of climate talks for 2015 said, “We leave Geneva with a lengthy text to work on in the coming months, but it importantly reflects the views and enjoys support from all Parties. After years of false starts and broken promises, restoring ownership and trust in the process is no small achievement and I think we have come a long way toward doing that.”

He also emphasised that the duties of the Parties is to work in between the sessions to understand the priorities, and the choices that exist in reaching a common objective of the climate agreement in Paris.

“Our job now is to take every opportunity at the remaining meetings, and the time in between, to understand each other’s concerns and interests as we look for common ground on the road to Paris,” he said .