Alphaxard Gitau is passionate about youth empowerment, community transformation, environmental conservation, and contributing to agricultural development. He lives in Kenya, and strives to be a voice for young people working on environmental issues. He spoke on his experiences as an advocate for action on agriculture  in Africa, and at the global level.

Alphaxard was brought up in a family of farmers. And focusing on agriculture was something natural for him.

“Growing up I always wanted to practise agriculture better than my dad did. As a young kid I used to plant my own vegetables. Whenever my dad would sell his vegetables, he would also sell the ones I grew as well. And then I would get the money which I saved or used for my needs,” explained Alphaxard.

He was motived by a young man whom he met while on an exchange program in Norway with the Norwegian Peace Corps.

“I had the chance to meet a young man while I was in Norway who was doing dairy farming in a very modern way, and in a very scaled up level. He motivated me to start my own agricultural activity when I returned to Kenya,” added Alphaxard.

Alphaxard lists access to finance as one of the key challenges faced when trying to establish himself as a youth farmer.

“Agribusiness is a costly investment. It is very hard for young people who lack money to form their own initiatives,” he added.

Another challenge he lists is the mentality of parents who want their children to be working as white collar professionals. He also highlighted issues related to agribusiness such as the middle-man syndrome from which the sector suffers to be key for youth facing difficulty when trying to access the field as professionals.

“Access to information is also an issue for youth who wish to engage in agriculture. There is lack of technical information on seeds, pesticides and other agricultural related information. And youth have issues because they are not equipped to practice agriculture efficiently,” he added.

Alphaxard envisions to build his business to be among the leading agro-products companies both for local and export market.

“I hope that my farm can be used as an example to young people locally, regionally and even globally as one of the success stories on agriculture by young people. I would like to contribute to the shift in agricultural development in our continent Africa through agricultural exchange programs for young people that will help them learn agricultural practices as well as policy implementation.” 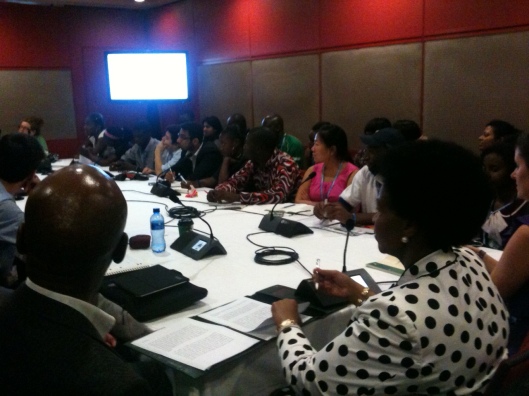 A youth briefing with the President of COP17, H.E Maite Nkoana-Mashabane was held at 6pm, in Mopane Meeting room in the ICC on the 2nd of December 2011. Speaking to the youth, the President noted the need for the leadership to take action and provided information on the development of negotiations on the green climate fund. Some of the extracts of her discussion with youth is mentioned below.

“We need leadership in action..It must take us a few steps forward and not back..We should not also be only talking about the second commitment..we need to start discussion of the legal work of the future framework. The work needs to start in Durban..There is a need for us to operationalize”

She also highlighted that “we need more inputs..so that by the time we adopt this, it will really take us forward..For small islands and developing countries they are saying this is not about adaptation but about survival..on adaptation the approach has been fragmented.” Thus she stressed further the need to concentrate on how can we make the mechanisms are well coordinated while differentiating technology mechanisms from technology transfer. She stated “technology mechanisms are not same as technology transfer”

Highlighting that language plays a key role in the UN negotiations she added further, “I have also learnt that in UN language, language makes a difference. If we let it lose, then all of us have to wait passive.”

Following her speech the President of COP 17, was willing to answer questions of youth. The questions posed to her were mainly centred on the green climate fund, gender and female negotiators in delegations, and the inputting of youth recommendations to the process.

“Q1. Much of what you spoke about was how will we fill the green fund how do we fill it..what is your opinion on innovative financing, and financial tax?

“ Q2. How have the informal talks been going on climate fund and its operation?”

“Q3. How do you ensure the involvement of more female negotiators and youth delegates in the negotiations?”

“Q4. What will happen if Kyoto Protocol fails in Durban?”

“Q5. Civil society submissions and their expectation, we never received an appreciation of it, we want to make sure that the document is useful somewhere”

Answering the questions collectively, H.E Maite Nkoana-Mashabane stated that the document sent by the youth constituency had been received and that the suggestions and the recommendations will be taken into account.
“The document has been received. We have appointed a senior government official to listen to the civil society needs. The Ambassador of South Africa will be working with the civil society till we appoint a new team.”
“Why am I not responding? I will be cheating if I sit here and start drafting outcomes.. I have to take your inputs to the that plenary..so that that outcomes what come from Durban will be influenced in making those decisions.”

“Globally women are a majority in all of the populations” but she added that the inclusion of women “is a struggle that we need to keep fighting for. No society strives by only using one hand. a society that needs to be dynamic needs to use both hands.” She also stressed on the role of youth in ensuring that there be accountability and inclusion of all parties in the delegations.

If KP fails..” these delegates, the leadership here needs to take the responsibility..what I hear from the delegates is that KP alone is not a solution to the problems we have, we need to work on the future framework.”

“CDMs are linked to the KP. There are many other elements that have developed with KP. We cannot be talking about KP and KP alone. We need to look at how we can advance this.. we need to work on elevating the ambition against of mitigating against climate change.”

She also added “because we are here..I am taking photos of you guys for memory”

“On the female negotiations I agree with you. We don’t need female only delegations but it needs to be balanced. And the language in the process makes it difficult for people to relate to the day to day realities.”

“We have no delegation saying that the Green Climate Fund should not happen. By the time the Ministers and Presidents arrive they will see that our negotiators have made a lot of progress. I must say that I have been quite heartened by the progress the negotiators are making. It has been difficult but there has been progress”

“There is no one saying that it must not happen now. We want to start hearing commitments..even with the global economic meltdown..how do we start pledging..I have had some delegations say that we should be up and about and running..we should start talking about the sources of funding..what we are trying to do is not to put cart before the horse.”

“The more we get more overwhelmed the more we get into darker alleys we do not know. We need to provide leadership in action..We should be finding solutions through green mechanisms and CDMs and those that do not undermine our future”